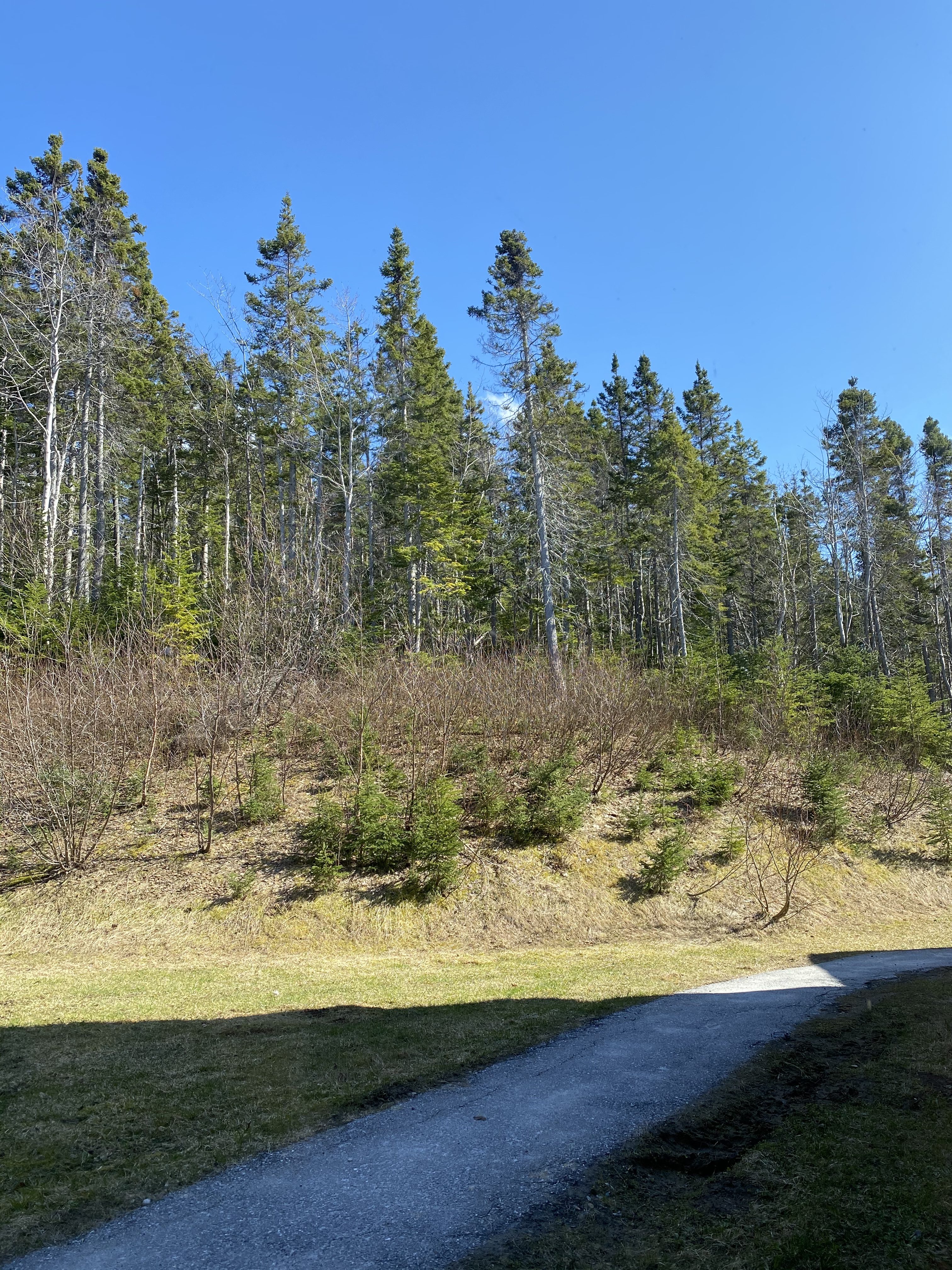 I’m in the middle of my last day of self-isolation.

I’ve been packing, cleaning, preparing to move to my more permanent residence … about to dive headlong into the next month of work. The first of two Spring Intensive in-person sessions for my MFA is about to start Monday morning.

It feels a bit dislocating … discombobulating maybe a better (certainly more interesting and theatrical) word for it. The way time has warped over the last 2 weeks, the speed with which things are starting to happen in preparation for the work to begin in earnest.

So, to … mark this shift into a new way of being, I offer here a brief meditation on the unreliability of the devices humans have used to mark time’s passage.

You don’t notice the miscues until they are what anchors you to the day. There’s something not quite right with the mechanism, you can hear it, but only sometimes. In those moments, the clock changes character completely; it’s no longer the drone of the day, the comforting rhythm that’s easy to ignore. Then it stops, or doubles up on itself, hiccups … becoming something more consuming … a nervous tick that reminds you of what you can’t fully grasp: the tiny, incremental changes all around you, that you can’t see and can’t hear, but are, nevertheless, more reliable narrators of change and time’s passage than humans will ever be. 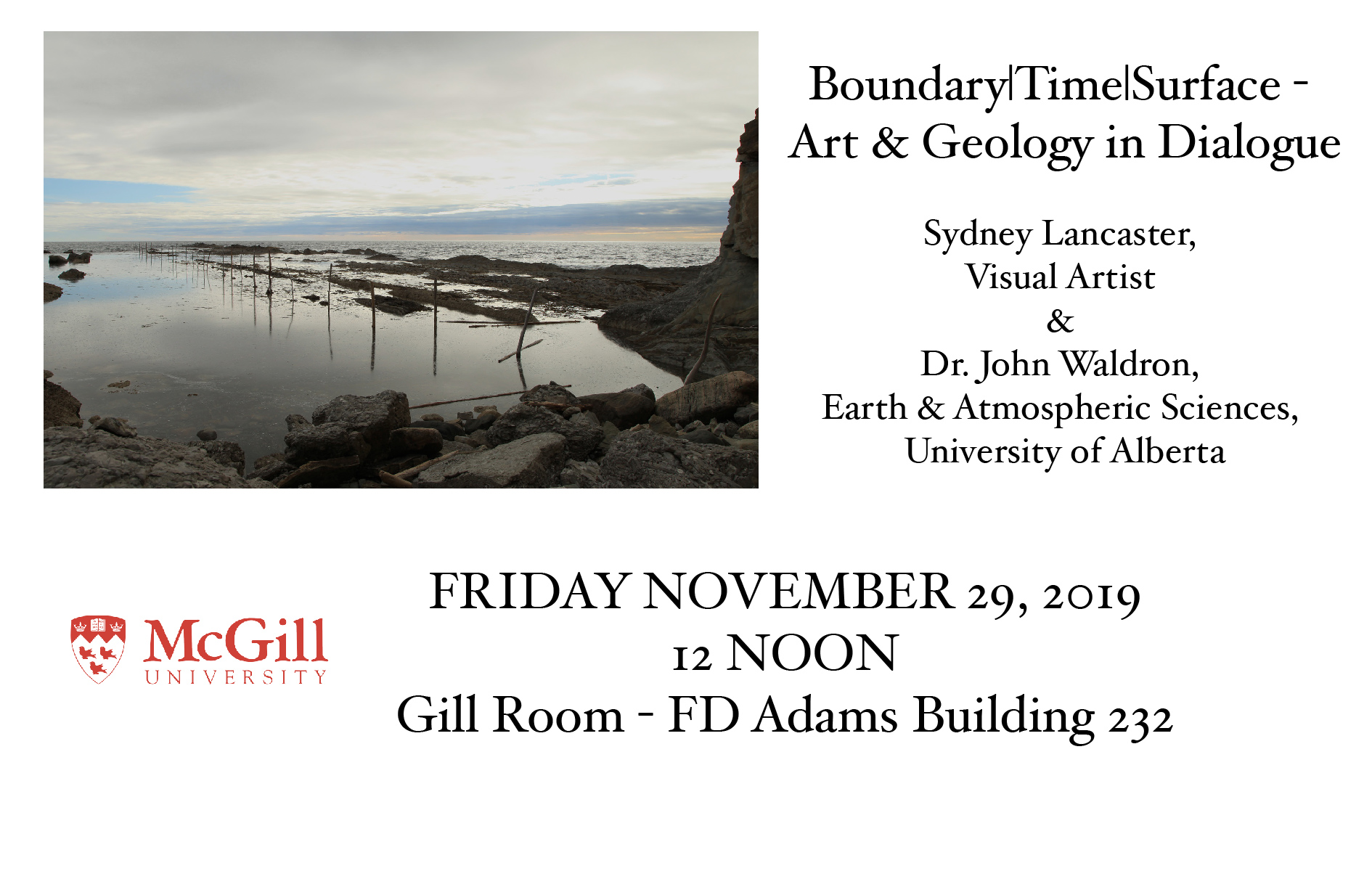 Today, I have the happy opportunity to share the Boundary|Time|Surface project with the McGill University community.

Very much looking forward to hearing everyone’s thoughts on the project! 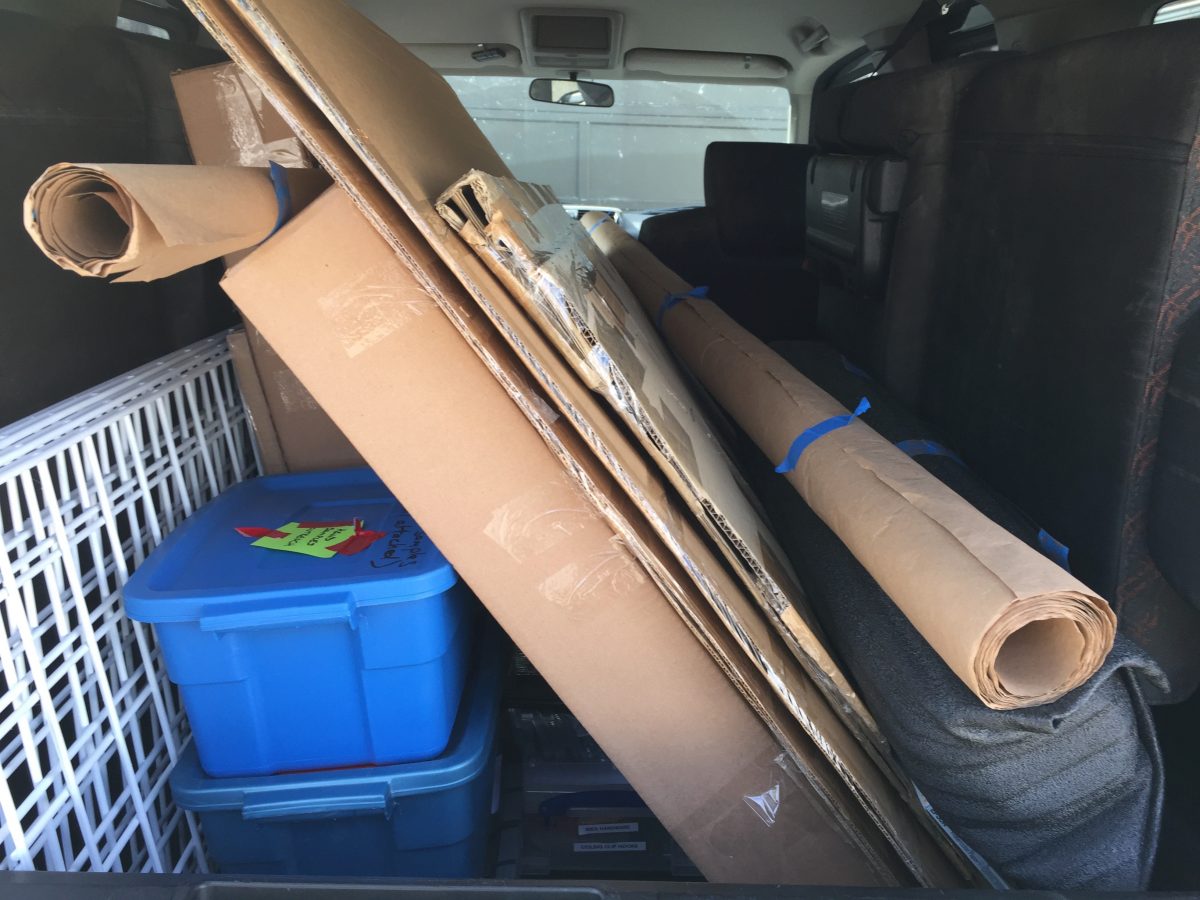 It’s officially one week from today that Boundary|Time|Surface opens at the Art Gallery of St. Albert! Not quite sure how the time flew by so fast (well, actually yes, I am – in the studio!) – but regardless – I find there’s always a sense of time speeding up just before a show.

And it’s been busy on a number of fronts: the not-glamourous jobs an artist does to make the stuff all happen the way it should for an exhibition.

Case in point (sorry of the awful sort-of pun):

Packing. Ah yes, making work is one thing – packing it is another entirely! Fortunately, I didn’t have to build crates for the work this time, as we can transport it ourselves – but the work still needs protection. And list -making becomes part of this process too, of course. Making sure that all the bits and bobs of hardware and tools and just-in-case things are sorted and packed and there when we need them for install.

And then there’s the transport part of it too:

Spent a couple of hours playing ‘car tetris’ with the bins and boxes and other stuff … and in a little while, we’ll be getting this all unloaded and dropped off at the Gallery. 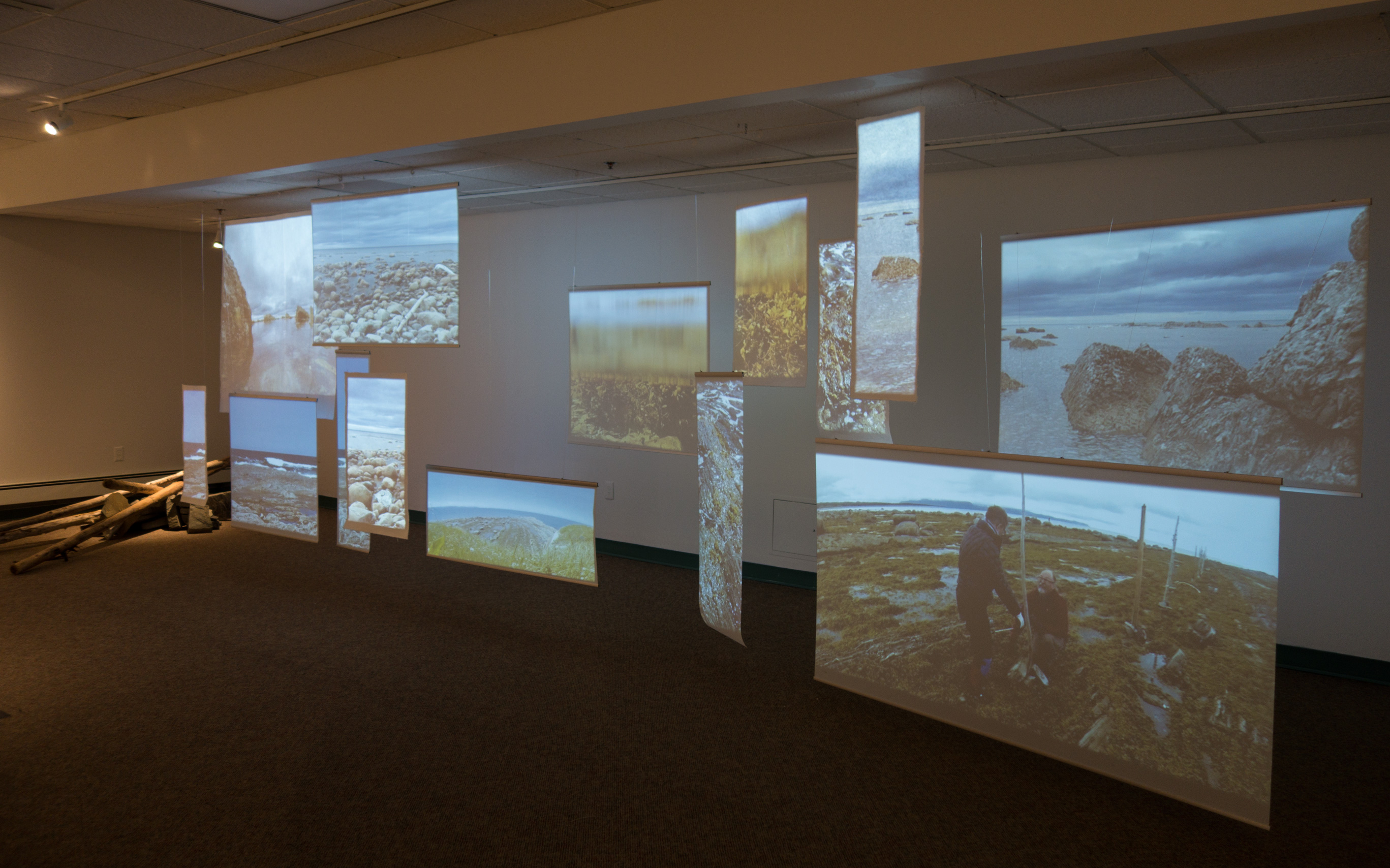 Just back from a whirlwind trip to Vancouver with my friend & collaborator Scott Smallwood – we installed Macromareal(redux) at Emily Carr for a month-long exhibition, and spoke to some of the students there.

Not sure I’ve caught my breath – but tomorrow (February 28) I will be speaking again, with another collaborator, about another project – this time, at the University of Alberta.

At 6pm, Dr. John Waldron and I will be speaking about our project, Boundary|Time|Surface, as part of the LASERAlberta series of talks on art/science collaborations.

I am really grateful & excited to have this opportunity to share this project with the wider community here – and I’m really looking forward to the feedback and discussion!

You can find more info about the talk & the project here … .

If you are in the neighbourhood, please join us!

Here’s a great little interview with Jonathan Girard and Deborah Carruthers about Slippages,and some of the thinking behind the work! Getting very very excited to see this all come together tomorrow. Enjoy! 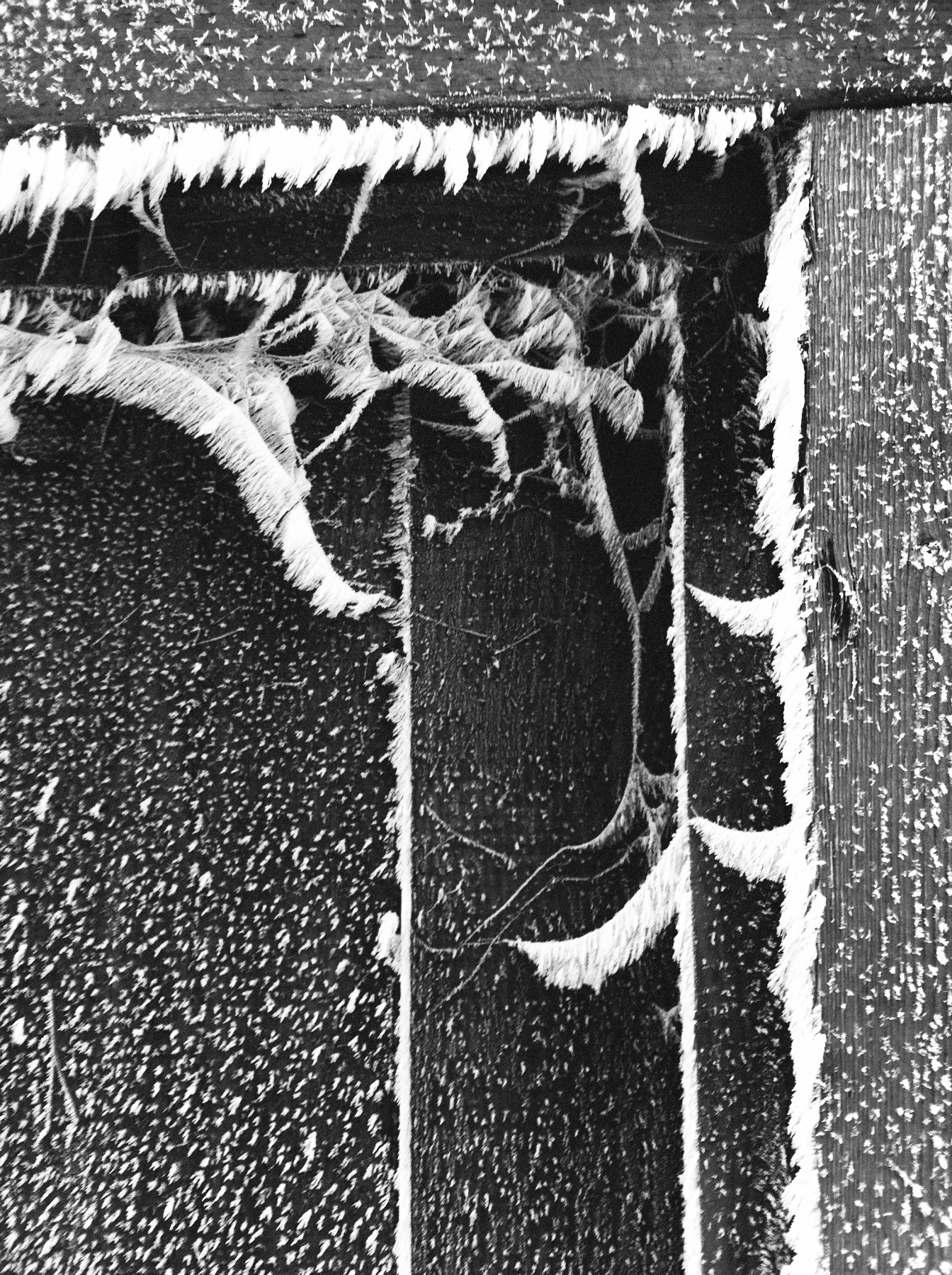 The weather offered some lovely reminders yesterday morning that this has been a rather humid winter for my part of the world so far.

Having spent the last three weeks + feeling like I was running all the time, these frosty feathers were a perfect reminder to me of the importance of paying attention to the details in one’s environment. And, of course, that taking the time to stop and really see offers worlds of peace and refreshment in this ever-busy world.

I’ve been coming across articles everywhere lately that are addressing the endless business that seems to pervade existence; the prevalence of being constantly plugged-in, constantly in touch, continually working, endlessly busy – and how counter-productive that pace actually is. How little we really wind up accomplishing, and at what cost. Busy isn’t necessarily any of the things we want to be: efficient in our days, producing quality work (whatever work we do).

The frost reminded me that it takes time to really create anything that’s worth making; that being present for the process is a great gift. And that time allows the mind to still, and to really work.

I have been thinking a good deal lately about light. Not only the way it shifts and changes continually, but it’s physical properties, and the connection between light and time on both the immediate scale (a 24 hour period shifting from dark to light and back) and the cosmic scale (star light, moon light, lightning, the mind-numbing distance that a light-year is).

These musings have come about for a number of reasons.

I am incorporating more and more photographic work into my practice in the last year or so, and so I am increasingly conscious of the technical elements around photography, and the light that I want to capture in the images I make. So it’s practical need as well as aesthetics in this case … and the realization that I have a massive amount to learn about photography and about light.

Living in Halifax for the last year, I have become very aware of how different the light is here than in Alberta – and how my own perception of space have been informed by growing up and living on the Prairie. The light here on the East Coast is far more subtle, incredibly nuanced … I know there are people who have lived out here for many years and complain about how unremittingly grey it can be at times… but it’s anything but constant. Even on the most drab winter day, the light changes constantly; shaped by fog, by rain, by snow, by the odd break in the clouds.  It really struck me this past winter; I am so used to the harsh simplicity of the Prairie light: brilliant blue skies that tell you how breath-suckingly cold it is outside, and how blinding walking in fresh snow can be. Leaden skies that produce the crispest whitest snow.

I’ve just got through reading a brilliant book by Ben Tufnell, called Land Art. It traces the history and variety of land art in the US, to the UK and Europe. Really fascinating stuff, and the fact that the work addresses the variation and methodologies in the UK and Europe is a big plus for me; the approach taken by several artists – Goldsworthy, Long, and Fulton in particular – appeals to my interest not only in ideas of transience, but also to my overall desire to ‘tread lightly’ in what I do as an artist and a human. This is all a preamble to the section of the book in which Tufnell discusses Turrell’s Roden Crater, a massive project that has been under construction since the late 1970’s in the Painter Desert in Nevada. This work is utterly amazing; the way Turrell works with the sky and all available forms of light is sheer genius.  To give you some idea:

Really quite magical, both in scale and execution. I would go there, absolutely, if it is ever open to the public.